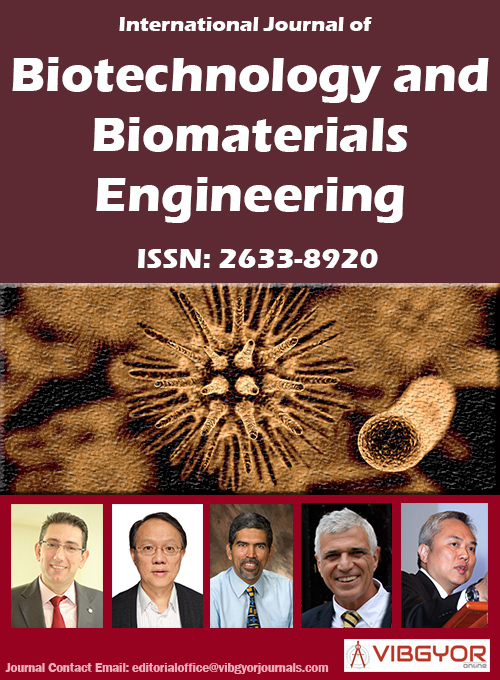 Copyright: © 2021 Koc EO, et al. This is an open-access article distributed under the terms of the Creative Commons Attribution License, which permits unrestricted use, distribution, and reproduction in any medium, provided the original author and source are credited.

Kefiran is a hydro-soluble polysaccharide, which can be isolated from kefir grains biomass. In the present study was characterised physicochemical and morphological properties of kefiran isolated from kefir grains biomass, obtaining from a local dairy company. High performance liquid chromatography analysis of monosaccharides revealed that kefiran was composed of glucose and galactose in an approximate ratio of 1.0:0.4 in nature. Infrared spectra of kefiran revealed the presence of carboxyl, hydroxyl, and amide groups, which corresponded to a typical heteropolymeric polysaccharide, which indicated a purified structure of isolated kefiran from kefir grains biomass. The scanning electron microscopy images of polysaccharide kefiran showed homogeneous morphology with porous and a sponge-like structure. The functional groups of kefiran can make it more attractive for many modifications.

Kefiran, a hydro-soluble prebiotic branched exopolysaccharide, is a hydroxyl groups rich, and heteropolysaccharide biopolymer containing glucose and galactose [1-4]. Kefiran has a molecular weight of around 106 Da [5]. According to chemical structure of kefiran, it is a branched hexa- or hepta-saccharide repeating units, that itself is composed of a regular pentasaccharide unit to which one or two sugar residues are randomly attached. It had a backbone composed of (1 → 6)-linked Glc, (1 → 3)-linked Gal, (1 → 4)-linked Gal, (1 → 4)-linked Glc and (1 → 2, 6)-linked Gal, with branch attached to O-2 of Gal residues and Glc residues situated in the structure end [2]. The diversity of kefiran glycosidic linkages is resistant to enzymatic degradation [3]. Kefiran is produced either from kefir grains or pure cultures kefiran of Lactobacillus kefiranofaciens under aerobic conditions or mixed cultures of Lactobacillus kefiranofaciens with Saccharomyces cerevisiae under anaerobic conditions [6-9].

Characteristics such as antimicrobial, anti-inflammatory, antitumor activities [10], immune-modulating, wound healing properties, blood pressure and cholesterol lowering ability, antioxidative, and anti-proliferative activities [11,12] have led to attract the attention of scientists. In addition to these, other functional properties of kefiran such as the ability to form edible films for use in food packaging [13,14], a potential texture modifier as a hydrocolloid and Generally Recognized As Safe (GRAS) status [15-17] to improve rheological properties of acid milk gels due to its physicochemical properties in increasing viscosity and viscoelasticity [18] have been of interest to researchers.

Novel technologies have been used in recent years to extract bioactive compounds such as ultrasonic, microwave, supercritical fluid, and enzyme-assisted extraction [7]. Hot water extraction is the most commonly used method for extraction of microbial exopolysaccharides. In a variety of studies, hot water extraction has been used to extract kefiran from kefir grains [17-20]. The purpose of this study was to evaluate chemical composition, molecular structure and microscopic morphology of the extracted kefiran and to examine the characteristics by applying different methodologies such as Fourier transform infrared spectroscopy, high performance liquid chromatography and scanning electron microscopy. These characteristics could help us to identify potential application for food industry and present some important basis for kefiran that has several health promoting properties.

Kefir grains were purchased from a local dairy company, Turkey. The grains were reactivated in ultra high temperature treated skimmed milk obtained from a market. Kefir grains (10 g) were inoculated into 100 mL of milk. After incubation at 20 ℃ for 24 h, the grains were seperated by filtration from fermented product. The medium was exchanged at the end of incubation for new culture. The culture fermentation was repeated for four subsequent weeks to increase kefir grains biomass.

The isolation and purification of kefiran biopolymer was achieved employing a combination of processing steps as described by Piermaria, et al. [19]. The method involved heating of kefir grains in a erlen mayer boiling water at 100 ℃ placed on a magnetic stirrer hot plate at a ratio 1:10 (kefir grain:water) and stirred 30 min (Arec Heating Magnetic Stirrer). The mixture was centrifuged at 10.000 g for 20 min at 20 ℃ (Universal 32 R by Hettich, Tuttlingen-Germany). The supernatant was precipited by addition of two volumes of cold ethanol and kept at -20 ℃ overnight. Precipitation phases were repeated two times. Finally, the kefiran exopolysaccharide was left as a white precipitate, and freeze dried (Labconco, USA). Chemical hydrolysis of kefiran polysaccharide was performed based on the method of Skalska-Kamińska, et al. [21]. The complete acid hydrolysis of kefiran was carried out using a heating plate. The determination of sugar residues obtained by chemical hydrolysis was performed by thin layer chromatography (TLC) and high performance liquid chromatography (HPLC) analyses.

The composition of acid hydrolyzed kefiran polysaccharide was investigated using the method of Adigüzel and Tunçer, [22]. The mobile phase was used as a mixture of formic acid, butanone, tert butanole, water (15:30:40:15 v/v/v/v), the spots were visualized by spraying aniline (2% v/v), phytallic acid (3.5% w/v) in water-saturated butanol and baking in oven at 90 ℃ for 5 min. The stock solutions for standards were prepared by dissolving 0.01 g of D-glucose and D-galactose (purchased from Sigma-Aldrich) in 100 mL distilled water.

Phenol-sulfuric acid method was used to estimate total sugars of the extracted kefiran samples with glucose as standard. 2 mg kefiran sample (1.0 mg/mL) was mixed with 1 mL phenol solution (5%) and 5 mL concentrated sulfuric acid at 25 ℃ for 5 min. The reaction solution was then heated for 15 min in boiling water bath. Absorbance was read at 485 nm by UV-visible spectrophotometer (UV mini-1240, Shimadzu-Europe) [7].

Monosaccharide composition of the kefiran

High performance liquid chromatography analysis was performed to check monosaccharide composition of the kefiran sample [23]. The kefiran solutions in a ratio 1:10 (w/w), which were extracted and hydrolysed according to the method described above, then all the samples were filtered through a microfilter of pore size of 0.45 mm (Millipore, Billerica, Massachusetts, USA) to remove impurities. The monosaccharide profile was determined by HPLC on a Agilent system (Agilent, Barcelona, Spain) equipped by measuring the refractive index detector (RID 20A device). The HPLC column was µbondapak-NH2 column, 250 mm × 4.6 mm, particle size 5 µm. The column was set at 30 ℃ using a temperature controller (Agilent) for separations. The chromatographic separation was carried at a flow rate of 1.3 mL.min-1, using a mixture aceto nitrile:water 80:20 (v/v) as a mobile phase. Standard glucose and galactose (Sigma, ≥ 99%) were prepared for comparison [24].

Bradford method was used to measure protein content of the kefiran samples with bovine serum albumin as standard. 1.0 mL kefiran sample (1 mg/mL) was incubated with 5 mL Coomassie Brilliant Blue G250 at 25 ℃ for 15 min. Absorbance was read at 595 nm by UV-visible spectrophotometer [25].

The kefiran solutions were cryofixed by immersion in liquid nitrogen and immediately freeze dried. The morphology images of all samples were investigated by scanning electron microscopy (Model Carl Zeiss EVO LS 10 SEM, Germany) at an accelerating voltage of 20 kV. The samples were coated with a layer of gold, 20 nm thick before SEM examination [19].

According to method reported by Adıgüzel and Tunçer, [22] sugar composition of kefiran EPS carried out by TLC that showed the presence of glucose and galactose and was in agreement with previous results [19,27]. As depicted in Figure 1, in acid hydrolyzed kefiran and standard sugars was identified as good shape spots on TLC plate. Non-hydrolyzed kefiran seperation was not achieve because the kefiran has high molecular weight [19,28]. Glucose and galactose monosaccharides in the hydrolized kefiran were visualized on the same spot on TLC plate due to similar molecular weights. The total sugar content of kefiran was estimated as 93.0% by the phenol-sulfuric acid method. In similar studies, total sugar contents of kefiran extracted by hot water were 99% [29] and 86.55% [7]. As determined by Bradford protein assay, kefiran grain showed a high purity grade (data not shown). Piermaria, et al. ([19] reported concentration of less than 0.01% of protein expressed per dry matter in kefiran solution. Indeed, kefir grains compose of a polysaccharide known as kefiran and a protein matrix [30]. The sugar composition of kefiran exopolysaccharide was analyzed using high performance liquid chromatography (Figure 2). The results from this study are given which revealed that kefiran is composed of glucose and galactose in a relative molar ratio of 1.0:0.4. Glucose had the higher proportion than galactose. This is different from that of the exopolysaccharide produced by kefir grain that consists of approximately equal proportions of galactose and glucose residues. Also, other researchers [13,27,31-39] have shown that the kefiran polysaccharide contains approximately equal amounts of glucose and galactose. In this work, these data are in agreement with the results reported by Liu, et al. [5]. He reported that the polysaccharide kefiran isolated from kefir grains grown in soymilk composed of more glucose than galactose. It has been explained that growth conditions and medium composition affect the sugar composition of the exopolysaccharide produced by lactic acid bacteria. Zajsek, et al. [40] identified glucose and galactose residues within the kefiran samples in a ratio of 1:0.7 using capillary electrophoresis. Pop, et al. [29] reported that kefiran polysaccharide isolated from kefir grains biomass is composed of glucose and galactose in a relative molar ratio of 0.94:1.1. Wang, et al. [41] reported that EPS produced by Lactobacillus plantarum KF5 was composed of mannose, glucose and galactose in a approximate ratio 1:4.99:6.90. Exopolysaccharides of lactic acid bacteria is used mainly in fermented milk technology may consist glucose, fructose, galactose, rhamnose, xylose, mannose [42].

The FT-IR results of kefiran exopolysaccharide demonstrated peaks with various characteristics within the wavenumber range from 3400 to 850 cm-1 (Figure 3). A major absorbtion peak 3280 cm-1 was observed, which was indicative of hydroxyl groups attributed to polysaccharides and water [29,41,43]. A weak stretching peak at 2896 cm-1 showed the presence of methyl groups in kefiran. The regio 1775-1700 cm-1 assigned to peaks contain lipid components in kefiran. Strong absorption at 1632 cm-1 was also showed which corresponded to amide I > C=O stretch and C-N bending of protein and peptide amines [7]. The finger print region for carbohydrates included the range from 1200 to 900 cm-1 which associated with stretching modes of carbohydrate rings and side group (-C-O-C, C-OH and C-H). The peaks around 900 cm-1 were indicative of the vibration modes of glucose, galactose and β-linkage in the kefiran structure [2,28,31,44].

In our research, the surface morphology of the kefiran were evaluated by SEM. SEM analysis of kefiran cryogels showed homogeneous morphology with porous and a sponge-like structure (Figure 4a and Figure 4b). This images were evaluated as a highly porous material, the unique microstructure of the kefiran exopolysaccharide makes it remarkable among common materials due to its distingue characteristics. Piermaria, et al. [19] reported that when the kefiran solution is allowed to gel before freeze drying quite a different structure is obtained. This a three-dimensional sponge like structure explains the high water holding capasity of the gels.

This paper presented isolation and physicochemical characterization of kefiran exopolysaccharide produced by kefir grains obtaining from a local dairy company. The results of structure identification indicated that kefiran polysaccharide contains glucose and galactose in a ratio of 1.0:0.4. Infrared spectra indicated very important reactive functional groups of kefiran, which can make it more flexible for many modifications. Sugar compositions of hydrolyzed kefiran exopolysaccharide achieved by TLC showed the presence of glucose and galactose. The total sugar content of kefiran was estimated as 93.0% by the phenol-sulfuric acid method.