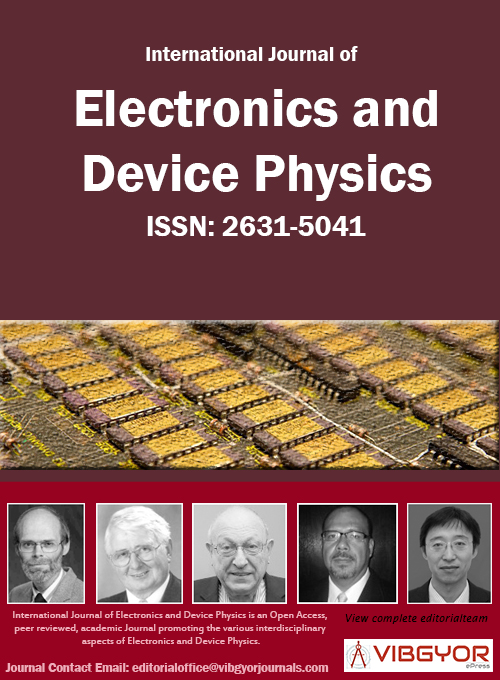 S-parameters comparison between conventional and proposed resonator at resonant frequency.

Table 1: The parameters simulation of the proposed filter after optimization process.

Copyright: © 2021 Abuhussain MM, et al. This is an open-access article distributed under the terms of the Creative Commons Attribution License, which permits unrestricted use, distribution, and reproduction in any medium, provided the original author and source are credited.

A new design of bandpass waveguide filter with Chebyshev response which operates in the E-band for downlink channel [71 GHz-76 GHz] at 73.5 GHz center frequency. The new design used a complementary split ring resonators (CSRRs) upper and lower rings that are placed on the same transverse plane. A simple model of lumped elements circuit (RLC) model is shown. The model of the proposed bandpass waveguide filter is synthesized and designed by using EM full-wave simulator CST. By selecting proper physical dimensions of CSRR design, a shortened physical length, a flat and lossless passband with better return loss over the conventional waveguide filter are obtained. As a result, the proposed filter is compared with the conventional bandpass waveguide filter coupled by inductive H-plane irises at the same resonant frequency 73.5 GHz. The proposed filter reduces the overall physical length by 37.5% and enhances the return loss up to 6.7%.

WAVEGUIDES, in general, are an electromagnetic structures constructed as a hollow metallic wave guiding used in the microwave communications and broadcasting such as filters, couplers, combiners, and amplifiers due to their less power consumption and high power handling capacity [1]. Recently, enormous researches have been increased on microwave bandpass filters (BPFs) with improving the frequency selectivity and a shortening the overall physical dimension of filter. For instance, such a demand results in various designs and implementations of waveguide filters with improved characteristics of sharpness, bandwidth, and physical size [2-4] are proposed and implemented.

Microwave filters are vital components designed with the purpose of selecting whether transmitting signals over specified band or rejecting signals over the other band [1]. They are available in several structures in the literature such as waveguide [5] or microstrip [6] bandpass filters but they all have the same common point by which their performance is evaluated using the distributed network concept. They usually consist of periodic structures exhibiting passband and stopband characteristics in various frequency bands [1].

For a transceiver communication system, maximum achievable data rate requires minimum distortion of its Radio Frequency (RF) transfer characteristics [7]. The E-band offers reasonable wideband frequency capability to reach the high gigabit rate required in wireless transmission systems [8]. The frequency band 71 GHz to 76 GHz is allocated for several applications by the International Telecommunication Union (ITU) and The European Telecommunication Standards Institute (ETSI) [9]. A variety of microwave filters with different characteristics of low insertion loss, high quality factor Q, and good frequency selectivity for E-band applications have been proposed [2,10-18]. These studies have been implemented based on the direct coupling phenomena [1,19].

In [2,5] authors have designed two channels waveguide diplexer for E-band to be employed for point-to-point broadband wireless gigabit connectivity. The bandpass waveguide filter for downlink channel [71 GHz to 76 GHz] with 73.5 GHz center frequency used H-plane inductive iris-coupled rectangular resonators which is implemented to have a Chebyshev response with five-poles. The downlink section of diplexer, BPF gives 5 GHz bandwidth and 15 dB return loss with 60 dB selectivity. In [5] the waveguide bandpass filter is designed for downlink channel 71 GHz to 76 GHz and fractional bandwidth (FBW) 6.8% at 73.5 GHz center frequency. Five poles chebyshev waveguide filter with a passband ripple of 0.0432 dB and direct H-plane inductive irises are chosen. However, this method of filter design is not able to minimize the overall physical filter dimensions.

Lately, the engineered materials [20] coined as meta materials (MMs) which are studied earlier by Veselago [21] are considered as a new area which has been opened in the implementation of microwave filters and absorbers due to their unique, unnatural, and exotic electromagnetic properties. For instance, split ring resonators (SRRs) have played a crucial role in design of the microwave filters [22] and absorbers [23]. Because of resonance structures of (SRRs) and their resonance behavior, they can be used for miniaturizing overall microwave devices.

In addition to the foregoing studies, gradually, MMs have been spread out in many designs to improve the performance of filter whether the bandwidth or the return loss using coupled split ring resonators (SRRs) and a negative image or complementary SRRs (CSRRs) [33-36] are proposed and designed. Graphene-based anisotropic meta filter has been design and tested to select and manipulate the valuable polarization without redundant reflection, the proposed work shows a wideband characteristic beyond the X-band [37].

In this paper, to improve the miniaturization of bandpass waveguide filter based MMs over a conventional filter for E-band at 73.5 GHz center frequency, and to improve its selectivity and insertion loss as well as decreasing number of resonators, a simple double symmetric unit cell CSRRs which are engraved from the center to facilitate and tune the resonating frequency at 73.5 GHz are synthesized and implemented as shown in Figure 1. Changing the physical dimensions of CSRR in a systematical manner, and selecting proper parameters x, w, t, h, s as shown in Figure 1 give an optimal solution for the overall filter design. Cutoff frequency f0, quality factor Q, and scattering parameters S11, S21 are studied and calculated by using full-wave EM computer simulation technology (CST) as well as a circuit simulator (ADS 2017) is used to implement and simulate a lumped elements RLC model for the proposed filter.

Unlike the conventional design of bandpass filters as shown in Figure 2 which used direct coupled H-plane junctions [2,5], the proposed filter is designed based on the MM resonators' technology that are coupled directly without H-plane junctions that gives the design important factors, especially for microwave applications such as compactness, simple structure, and good performance. According to these features, the pro- posed filter could be employed inline with low noise amplifier (LNA) for E-band receiver circuits which works at 73.5 GHz center frequency to suppress an unwanted signal band for the backhaling link.

This means that an increase in filter order n will give more sharpness and enhance filter's bandwidth as well; However, in the meanwhile, filter design will be more complicated. The amplitude-squared transfer function that describes this type of response is given in [1].

A 5th order waveguide bandpass filter [2,5] has been designed with chebyshev response based on (1) and (2) as shown in Figure 2. The waveguide bandpass filter has been designed for downlink band and according to the iris coupled resonators [19]. Waveguide filter is employed for E- band applications [71 GHz-76 GHz] channel with 73.5 GHz center frequency, and bandwidth 5 GHz with return loss 20 dB as shown in Figure 2. The input and output external quality factors and the coupling coefficients are computed for fractional bandwidth FBW = 6.8%. The calculated values are and Q = 14.279.

In the late of 1960s, Veselago has paved the road for using unnatural material [21] with negative constitutive parameters μ and ε. Considerably later, the evidence of medium with simultaneous negative parameters both μ and ε was demonstrated experimentally [20]. In [38], the use of CSRR to design a compact filter by an engraving metallic sheet is demonstrated. Here, in this paper, and based on [39] a double ring meta- resonator engraved from the center of CSRR as shown in Figure 1 is designed. Selecting proper CSRR physical dimensions and based on the coupling phenomena between rings move the resonant frequency and control the bandwidth as desired.

Figure 3 shows the frequency response for both resonators conventional and proposed. The microwave resonant circuit in high frequency behaves as RLC lumped elements in low frequency circuits that can be excited by external magnetic source. To obtain lumped elements model from distributed model, values of components that are calculated by using (3)-(5) as proposed in [31]. The equivalent lumped elements model for the proposed meta-resonator (microstrip) is shown in Figure 1, and the response for both scattering parameters S11, S21 for CST model and circuit simulator model is shown in Figure 4.

Based on the initial design specifications of the bandpass filter H-plane, resonant frequency f0, number of resonators n, bandwidth BW, low pass prototype with element values gi, and insertion loss of filter being assumed, then the conventional resonators are designed to get the desired BPF as shown in Figure 2. To obtain the bandpass filter from a low pass prototype filter with g parameters g0 = 1, g1 = 0.9714, g2 = 1.3721, g3 = 1.8014, g4 = 1.3721, g5 = 0.9714, and g6 = 1, the frequency transformation method is used here [40] as shown in Figure 2. If the conventional bandpass waveguide filter for E-band used insertion loss method [2,5] with inductive apertures, and the proposed metamaterial bandpass waveguide filter as shown in Figure 5 are compared with each other, the use of MM technology shortening the overall physical length of the waveguide filter by 37.5% and enhancing the return loss up to 6.7% at the same 73.5 GHz center frequency as shown in Figure 6. In Table 1, the parameters simulations of the proposed filter are shown before and after of the optomization process which used the Interpolated Quasi Newton (IQN) method in CST. As seen from the Table 1, initial values and final vlaues (optomized) are slightly divarge, however this change improved the overall results such S11 and S21.

A simple methodology to control bandwidth and cutoff frequency of waveguide filter is proposed and implemented. A three order CSRR-loaded bandpass waveguide filter is de-signed and simulated by CST along with ADS circuit simulator. The filter's dimensions are optimized and tuned toward the desired center frequency at 73.5 GHz. The filter's size reduced by 37.5% if it was to be compared with the conventional bandpass filter with H-plane junctions. The proposed filter could be employed in line with low noise amplifier (LNA) for E-band receiver circuits which works at 73.5 GHz center frequency (71 GHz-76 GHz) to suppress the unwanted signal band. For future work, the proposed waveguide filter will be employed to design a waveguide diplexer and multiplexer.