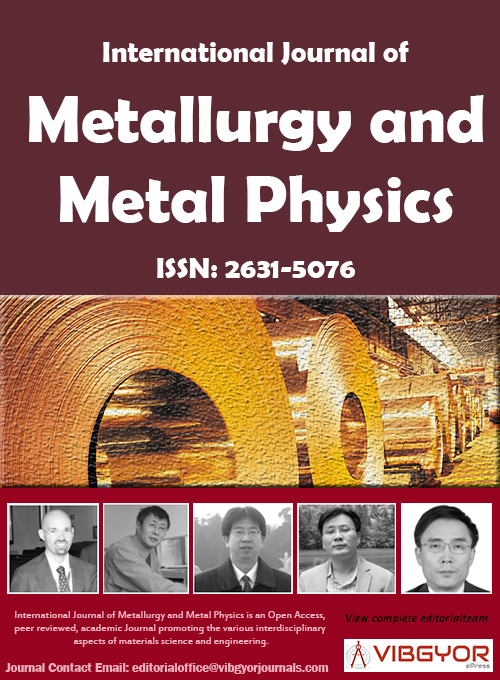 Transferring the well-mixed charge into the sintering crucible [28].

Increase in the lifetime of mines (years).

Table 1: Chemical composition of iron ores in the three localities [26].

Table 2: Chemical composition of the oxide fines and the sludge*.

Table 5: Chemical composition of the oxide fine and the sludge.

Copyright: © 2021 Rassoul EMA, et al. This is an open-access article distributed under the terms of the Creative Commons Attribution License, which permits unrestricted use, distribution, and reproduction in any medium, provided the original author and source are credited.

A novel method based on blending El-Bahareya ores together with the highly rich in iron- and impurities-free wastes is proposed.

Several pilot scale experiments were performed in HADISOLB Company, where different weight ratios of waste and El-Bahareya ores were mixed, then sintered. The chemical composition, physical and mechanical properties of the produced sinter were determined for each set of experiments. As a result, the validity of this novel method was proved.

The novel method is simply to prepare a suitable mix by blending different weight ratios of El-Bahareya ores and the W.M. to achieve the following targets: 1) An increase in the total iron content of the charge, 2) A decrease in MnO and Cl- contents in the iron bearing material, 3) A prolongation of the lifetime of El-Bahareya mines and in the limestone quarry in Bani-Khaled, 4) Prolongation in the lifetime of the sintering tray due the decrease of corrosion, and 5) To achieve better economic indices in all the related processes.

Sintering of iron ore has been extensively investigated to get better insight into the process [1-5], including study of the use of pellets, sinter, and nut coke charges [6-8], thermodynamic analysis [9,10], and measurements and characterization [11,12].

The presence of relatively high content of alkalis in the blast furnace burden (sinter) creates a lot of problems [13-15], such as:

a) Formation of scaffolds and scaps on the furnace lining, which reduces its useful volume.

b) Excessive coke disintegration, which leads to higher coke consumption.

c) Enhances the swelling properties of the iron-bearing materials, which lowers the permeability inside the furnace.

d) Shortens the lifetime of the furnace lining.

It is well known that the alkali content in the last furnace burden at HADISOLB (Helwan) is quite high compared to other steel plants in many countries.

The circulation of alkalis inside the blast furnace deteriorates its performance. It is within the temperature region 700-1200 ℃ that alkalis can be expected to exert their greatest influence on burden materials and refractories [13].

The Egyptian Iron and steel company (HADISOLB) depends for its pig-iron production on the sintering of El-Bahareya ores, whose iron content is < 50%, beside the following impurities: MnO > 2% and chlorides > 0.6%. The impurities cause several problems successively in the sintering, the blast furnace and the steel making operations.

Meanwhile, in Egypt there are four steel making companies using the direct reduction (DR) route, and are suffering from the accumulation of the highly rich in iron > 67% and of almost zero impurities waste. The weight of the wastes from the four companies is about one million tons/year, which can be considered as a virtually high rich and highly pure iron oxide mine.

The integrated iron and steel company - HADISOLB - at Helwan, Egypt, adopts the sintering -Blast furnace - BOF route to produce pig iron and steel. HADISOLB uses local iron ore located in El-Bahareya oasis, which contains a relatively low iron content (Fe < 50%), high manganese (MnO > 2.5%, and high chlorides (> 0.15% Cl-). The head of the iron and steel company, HADISOLB, had submitted a memorandum in which he stated that the results of the performed experiments in the first field stage of operation proved that HADISOLB will never achieve its designed capacity stated unless the company achieves a way to get rid of the threatening impurities, such as high Cl- and MnO contained in El-Bahareya iron ores, which is the only economically available iron ore for HADISOLB [16].

On the other hand, there are four integrated steel companies in Egypt which adopt the gaseous reduction route -DR-, and suffer from their accumulated wastes which contain ~67% iron and almost zero% MnO and chlorides in the form of oxide fines and sludge which are as by-products in the stage of the sponge iron production [17]. Figure 1 shows the highly rich iron oxide wastes in the back yard of EZDK steel company in Alexandria, Egypt. Its annual formation as W.M. from the four D.R. companies is estimated to be about one million tons.

Based on the above facts a novel idea was illuminated; it is simply to prepare a suitable mix by blending different weight ratios of El-Bahareya ores and the W.M. to achieve the following targets [18-20]:

1. An increase in the total iron content of the charge.

2. A decrease in MnO and Cl- contents in the iron bearing material, used in the blast furnace burden.

3. A prolongation of the lifetime of El-Bahareya mines and in the limestone quarry in Bani-Khaled.

4. Prolongation in the lifetime of the sintering tray due the decrease of corrosion.

5. To achieve better economic indices in all the related processes.

HADISOLB is facing nowadays a big problem which could be expressed as:"to be or not to be!" [21].

It adopts as an integrated company the sintering-Blast furnace-BOF route which necessitates from the first beginning to have a high-quality iron ore to produce high quality sinter ... and so on, and thus the highest economic indices for each of these steps will be achieved [18,22,23]. The sintering charge usually includes, beside the iron ores, the required amounts of L.S. as a flux, coke and water to produce sinter of a specific composition and quality [24,25].

As a matter of fact, El-Baharey iron ores with all its handicaps, is the only practically available iron bearing material that HADISOLB can get. Meanwhile the head of HADISOLB had previously stated in his memorandum that unless the company finds a way to get rid of the threatening impurities, such as chlorides and MnO, contained in El-Bahareya ores; HADISOLB will never be able to achieve its designed capacity. And thus, getting rid of the effect of these threatening impurities will be the aim of this investigation [17].

Blending of ores from the three localities should lead to the specifications previously agreed upon, in which Fe% should be > 51% and Cl- should be < 0.6 and MnO should be < 2.4 However, after 40 years of exploitation, El-Bahareya mines cannot anymore fulfill such obligations. The iron content in the blend is shown in Table 1 and is less than 50%.

Waste materials: By waste material we mean the iron oxide fines and the sludge. The chemical composition of these waste materials, Figure 2, as analyzed by EZDK Company, is given in Table 2.

This waste obtained from the EZDK Company was delivered to the Egyptian Iron & Steel Company (HADISOLB), where it was stored in an open space, and different mixtures were prepared from it. The chemical analysis done by the Egyptian Iron & Steel Company on the samples is shown in Table 3. These were the burdens we used in our experiments, as shown in Table 4.

Bahareya and W.M. of different weight ratios from El-Bahareya and W.M. -fine oxide and sludge- were blended together. Every blend is considered as the only iron-bearing material in the sintering charge. These blends were as shown in Table 5, which shows the chemical composition of the oxide fine and the sludge (The waste materials, as shown in Figure 1).

The sintering charge was prepared by dry mixing predetermined weights of lime stone and coke in order to get sinter with basicity (CaO/SiO2) around one [27].

Mixing the dry blend with limestone and coke was accomplished by spraying water into the charge till the required humidity is obtained. The well-mixed charge then should be transferred into the sintering crucible, as shown in Figure 2 [28], which shows the pilot scale sintering unit, after putting enough coarse sinter on the sintering tray, and a thin layer of fine coke should be added on the surface of the charge in order to initiate the combustion, and for the sintering process to begin.

In Table 4, the average chemical composition and the drum test for all sinters produced using blends of different ratios are given.

One can come to the following conclusion that each 1% rise in the Fe content in the charge:

1. Will lead to a rise in the productivity of the blast furnace by 1.8%, as shown in Figure 3.

3. Will lead to a reduction in the slag which is reflected on the consumption of L.S. and a prolongation of the lifetime of the L.S. quarries in Bani-Khaled.

5. The decrease in the MnO content will be positively reflected on the productivity of the oxygen converters, i.e. the number of heats/day will increase.

In Table 4, the average values for both the chemical composition and that of the drum test for all sinters are given.

Figure 6 shows the decrease in Cl-% and MnO% as the blending ratio is increased, plotted from the data of Table 4.

As a matter of fact, any increase in the iron content of the charge, beside the decrease in the threatening impurities, specially the halides, will be strongly reflected on the economic indices of all the production processes, and according to the data provided by HADISOLB.

The results illustrated in Table 4 indicate that the sinter the blend of Experiment no. 8 (30% ore and 70% waste) is the best blend, since it has the best mechanical properties of all blend {drum test (-5 mm%)}.

Besides, several other benefits were accomplished, such as:

1. Extension of the lifetime of El-Bahareya mines.

2. Evaluation of the expected increase in the production indices in both the sintering, blast furnace, and steel making operations.

3. An extension in the lifetime of the tray of sintering machine due to the reduction of corrosion resulting from chlorides in the waste gases.

It is highly recommended to perform industrial-scale experiments for the sintering charges using different blends of the 70%-30% waste with different percentages of calcareous mud [29]. This will be the subject of a forthcoming publication.